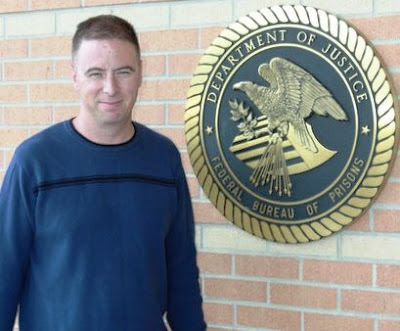 Chaplain Satterfield brought Dr. Sidebotham (top, www.oprev.org) to work to speak to about 30 Muslims and Christians, helping each other understand each other better.

Here is an article CH Satterfield wrote that appeared in the NAECC newsletter: "I started my CH career by getting 15 months of Clinical Pastoral Education at the Veteran Affairs Medical Center in Pittsburgh, PA and at the Swedish Medical Center in Englewood, CO. Then I joined the US Army as an Active Duty CH for 9 years, including 28 months in Afghanistan, Iraq (4 months at the Abu Ghraib and Cropper prisons) and Kuwait.

It was then time for a change. I had previously volunteered in prisons when I was with Youth With a Mission in Scotland and W. Africa, and I also volunteered in the Pueblo, CO city jail. I was open to prison ministry and in Nov 2010 I stared working at the Federal Correctional Complex in Florence, CO. The majority of my ministry time is spent at a medium security facility housing male inmates, where I serve prisoners who represent about 25 religions. As a Christian CH endorsed by the NAE, I only perform worship services for Christians. A recent highlight was leading a Christian service for about 75 where I shared about my trips to the Holy Land over the years.

In addition I spend several hours per week at the male minimum security satellite prison camp. I regularly co-lead worship on a keyboard and preach to about 20 Christian inmates there. I also co-lead a group of about 12 in Threshold, the Bureau of Prisons faith-based community re-entry program to provide guidance to inmates in transition and promote accountability.

It has been a challenge learning to work in the prison while being the 169th Fires Brigade CH in the CO Army National Guard and a Doctor of Ministry Marriage and Family Counseling student at Denver Seminary, but I know the Lord has been using me to nurture the living, care for the wounded and honor the fallen, For God and Country!

Posted by Steve Satterfield at 5:47 PM