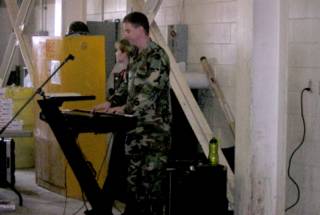 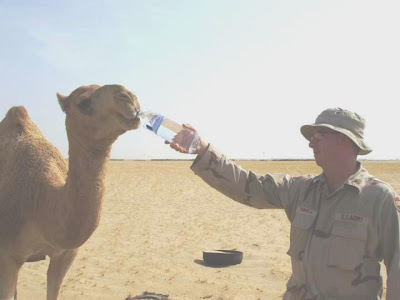 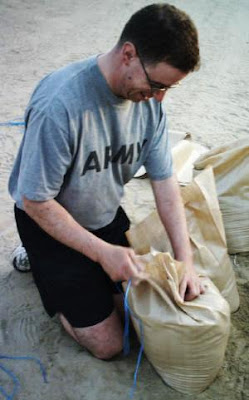 CH Steve Satterfield preached in Kuwait in his NBC suit. 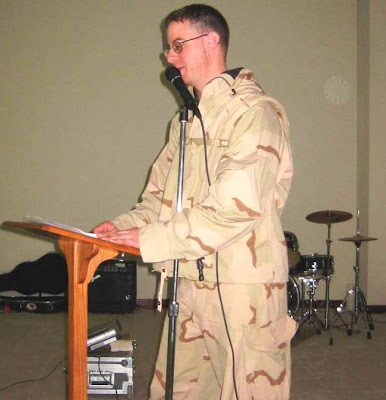 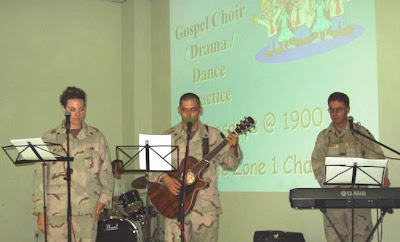 CH Steve Satterfield helped with a baptism in Kuwait. 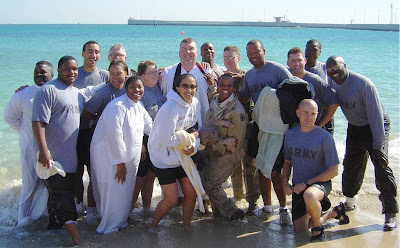 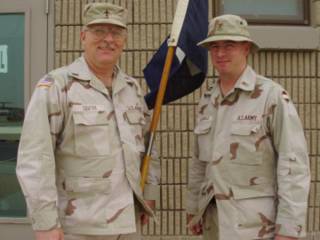 CH Steve Satterfield (right) with a friend at the chapel in Arifjan, Kuwait, 2003.
.

Posted by Steve Satterfield at 6:11 PM 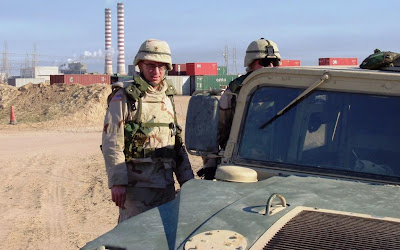 CH Steve Satterfield in Kuwait in OIF1 in 2003. Don't laugh too much at the old school uniform or the glasses! :)

My stuff is on the way to Germany, I've moved out of my house into a hotel room on post, and I'm almost done clearing. I'm looking forward to the Christmas Eve service at New Life Church. It's their first service in their new 8500 seat sanctuary. It's amazing what God has done through Ted Haggard the last 20 years, after he started in the basement of his home. He is the president of the National Assocation of Evangelicals (NAE), who endorse me to be an Army chaplain. I'm still ordained with the Association of Vineyard Churches (AVC). It's hard to compete with New Life, which is like a Vineyard Fri - Sun nites, which is when I've been going. I led a weekly lunch small group for them this year on post.

I'll go to the midnight Christmas Eve service at Wellshire Presbyterian (USA) in Denver, where I grew up, to see some friends. I'll have Christmas lunch with family, then head back to the Springs, since I preach on Sunday. I fly to Germany on the 2nd. I think I'll be able to stay there awhile, so I'll try to visit some religious landmarks. I may go to an NAE conference in Austria over the Martin Luther King holiday. My bosses are also open to me returning to Colombus, OH the 1st week in May for the AVC conference (which happens every 2 years).

I'll be the first chaplain the 2d Military Intelligence (an oxymoron, I know! :)) Battalion in Darmstadt will have, so it'll be a learning process for both of us. I'll probably live on post, and I'll be buying a newer vehicle there, since my 91 Explorer won't pass the rust inspection for shipping. Please pray God's will be done with all of this, as well as for those deployed in Iraq, Afghanistan, Kuwait, etc. My new contact info is below. Merry Christmas and Happy New Year!

I had Nate Rees' "Nameless" band play for our Organizational Day. I'm supposed to move to Germany for 3 years in January (probably with a deployment sometime). Pray God's Spirit moves amongst us!

Since I joined the 52nd Engineers the last couple of months, I co-led a Building Strong and Ready Families marriage retreat for 20 couples and their kids. I also did a Prayer Breakfast (where I co-led music) and 100 people showed up. I move to Germany in January, so please keep me in your prayers as I transition.

2017 update: A friend can be heard on www.kuhsdenver.com: https://www.mixcloud.com/widget/iframe/?feed=https%3A%2F%2Fwww.mixcloud.com%2Fstephenraywatts%2Fconscious-conversations-1-1-17-show-44%2F&light=1 and
http://vineyardjusticenetwork.org/ambassadors-of-peace-in-wartime-a-conversation-with-rick-love-and-chaplain-wayne/
Posted by Steve Satterfield at 6:09 PM