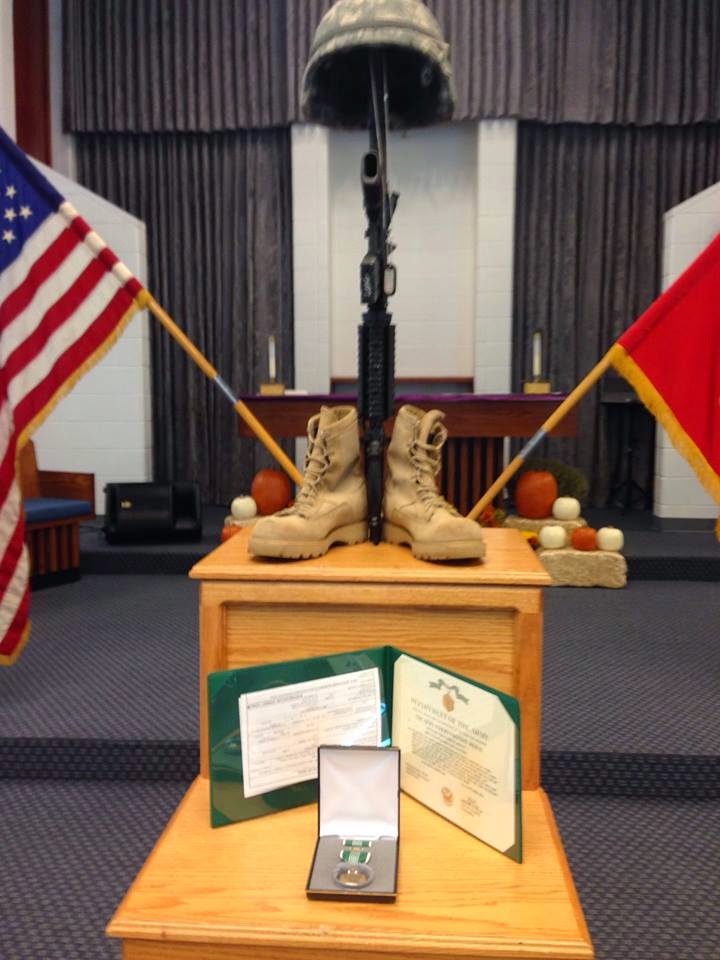 SGT Keenan, it was an honor to lead your Memorial on Sunday. Thanks for serving. RIP.

Posted by Steve Satterfield at 5:18 PM 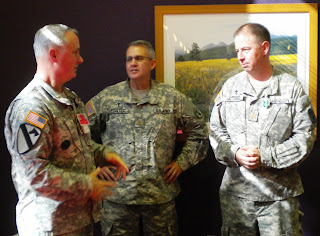 Evans Army Community Hospital Command Sergeant Major Rost and Chaplain (Major) Foster (Department Chief) thanked Chaplain (Major)Satterfield for his year and a half working there at his farewell party yesterday. He received the Commander's coin for which he's thankful.
Posted by Steve Satterfield at 4:17 PM 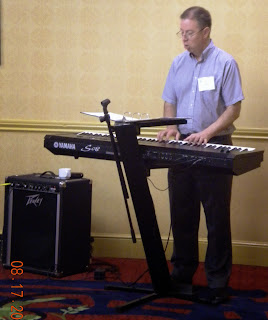 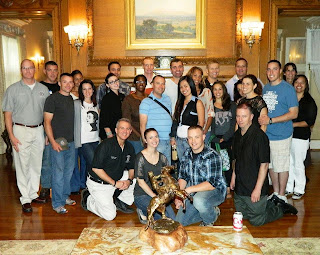 Chaplain Satterfield co-led a Marriage Conference at the Penrose House in CO Springs, CO.
Posted by Steve Satterfield at 4:00 PM 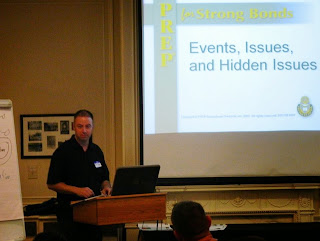 Chaplain Satterfield co-led a Marriage Conference at the Penrose House in CO Springs, CO.
Posted by Steve Satterfield at 3:59 PM 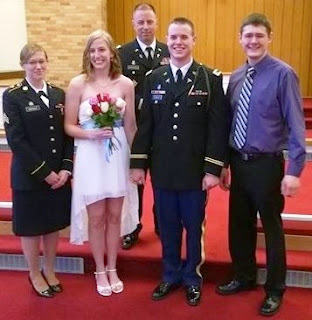 Chaplain Satterfield did a wedding of two Lieutenants at Provider Chapel at Ft. Carson, CO.
Posted by Steve Satterfield at 3:53 PM 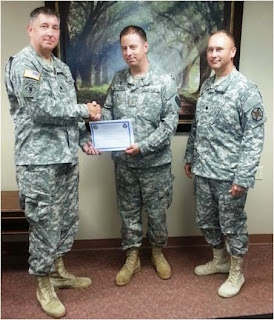 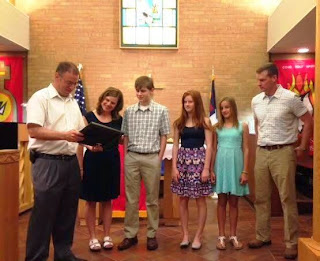 It was an honor to do confirmation of the kids of a couple I respect.
Posted by Steve Satterfield at 7:44 PM 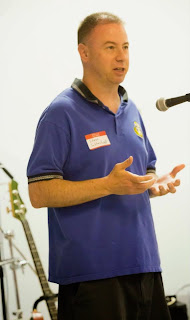 Chaplain Satterfield speaking at Vacations for (Wounded) Warriors at a VFW in Denver.
Posted by Steve Satterfield at 7:43 PM

http://www.amazon.com/Beyond-Post-Traumatic-Stress-Homefront-Struggles/dp/1611323665/ref=sr_1_1?ie=UTF8&qid=1404947478&sr=8-1&keywords=beyond+post-traumatic+stress I met Dr. Hautzinger years ago as she was researching this and I went to her book release party. As a former member of the 4th Infantry Brigade Combat Team it is interesting looking back at our history and seeing an assessment of it. I appreciate her putting in writing our history so many can learn from it. Here is a review I wrote about her book: Beyond Post-Traumatic Stress (PTS) was published this year by Left Coast Press, Inc. It was written by Sarah Hautzinger (Ph.D, Johns Hopkins), Associate Professor of Anthropology at Colorado College. It is about how Operations Iraqi Freedom and Enduring Freedom have affected Fort Carson, which is about 8% of the Colorado Springs, CO population (p. 275). Part One is about Warriors Coming Home. A positive outlook is instead of PTS, we have Post-Traumatic Growth. "War is the most adverse environment you will ever encounter, but you can come back stronger and wiser." (p. 37) "This is the "opportunity" side of crisis. Trauma and imminent death can lead people to see life in new and positive ways. Many returning Soldiers have reported being changed in good ways - appreciating the simple things in life, spending time with Family, confident to respond bravely under pressure, etc. Look for this and amplify it in the Soldier's life." A Unit Chaplain's Response to Trauma and Combat Stress by Chaplain (Lieutenant Colonel) David Mickelson, Number 21. In 2009 the EPICON (epidemiological) report was released. "One portion of the study analyzed the 14 soldiers arrested for murder, attempted murder, or manslaughter . . . (The study) did not reveal any one single cause, but rather a comprehensive list of individual, predisposing factors such as criminal behaviors, drug and / or alcohol abuse, prior behavioral health issues, and barriers to seeking behavioral health care." (p. 82) This report can be found at [...] "The 4th Brigade (about 3000 Soldiers, there are 5 brigades on Ft. Carson) as a whole lost 45 of the 49 Fort Carson soldiers killed in Afghanistan by the time they returned to Fort Carson in June of 2010". (p. 93) It has been called "The Murder Brigade" (p. 238) because of the paragraph above. I had the honor of being one of the chaplains in that Brigade then. I lost a Soldier and an Airmen I worked with on this year-long deployment. We had to lean on God, our Families and one another to survive. The following are concerning statistics from page 203. The CO Airmen tend not to cause problems. They tend to be better educated and self-controlled. "The county could boast methamphetamine use at a rate 40 - 50 percent higher than other large counties in Colorado." (Even though drugs are illegal, some Soldiers still do them.) "During 2009 El Paso County received the most child abuse and neglect referrals of any Colorado county." (There is a weekly Case Review Committee to try to solve this problem.) "The veterans' suicide rate was . . . more than double the rate of the general population in El Paso County." (Every Army unit must do yearly suicide prevention, sometimes chaplain led.) Part Two is about War's Labyrinth, how challenging war can be, like a complicated maze. One PTS solution is to use free resources, such as [...] (p. 175). This is a retreat center in Buena Vista, CO that is dedicated to helping our Wounded Warriors heal. Another solution is on page 187. The former Evans Army Community Hospital Commander "Colonel John McGrath attributes the rise in soldiers seeking care to placing or "embedding" behavioral health teams in combat brigade facilities". This book is a good summary of what happened at Fort Carson then. It was personally healing to read and write about it four years later as I learned more about the history of Fort Carson and the effects of our Soldiers deploying and redeploying. Dr. Hautzinger's review is accurate and fair and helps us learn how we can help those who are hurting because of war. Steve Satterfield is a Doctor of Ministry candidate in Marriage and Family Counseling at Denver Seminary. He has been a US Army Chaplain for 13 years.
Posted by Steve Satterfield at 7:41 PM

The "Jammin' Chaplain" was in The Pain Killers hospital band at Ft. Carson, CO for our Organizational Day. 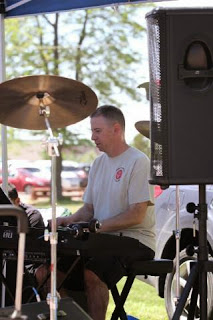 Posted by Steve Satterfield at 2:57 PM

Thoughts for a class on healing from war: Numbers 31: 19 "And you, camp outside the camp seven days; whoever has killed any person and whoever has touched any slain, purify yourselves, you and your captives, on the third day and on the seventh day. 20 "You shall purify for yourselves every garment and every article of leather and all the work of goats' hair, and all articles o...f wood." John Wesley (the founder of the Methodist church) wrote this was regarding "All which had contracted some ceremonial uncleanness either from the dead bodies which wore them, or the tents or houses where they were, in which such dead bodies lay, or from the touch of the Israelitish soldiers, who were legally defiled by the slaughters they made." (www.biblemaster.com) "During the High Holidays, Judaism teaches that prayer, repentance, and acts of righteousness and charity can gain us forgiveness. The key concept of repentance is Teshuvah, which means "return". Like Jonah, we have fled . . . like Job felt banished from God's presence." War and the Soul by Edward Tick, PhD, p. 209. The US Army doesn't formally do a week long "redeployment retreat" or "purification ritual", just mandatory training. I wonder if we should. I realize we're in a time of financial cutbacks.
Posted by Steve Satterfield at 3:18 PM

So I should be smiling since I co-led "Laugh Your Way to a Better Marriage", right? :) 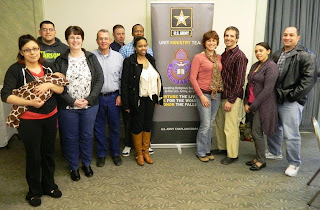 Posted by Steve Satterfield at 3:42 PM

Chaplain Steve Satterfield speaking at his Mom's Celebration of Life. Yes, his stole's a little crooked. :) 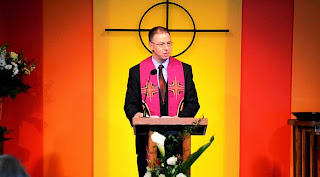 Posted by Steve Satterfield at 7:29 PM

http://youtu.be/5URxc7bfT0c Here are the Old Testament readings as I'm wearing the stole my parents gave me at Mom's Celebration of Life on 11 January 2014. http://youtu.be/foLia14ebwo Here is my Remembrance of Mom.
Posted by Steve Satterfield at 7:33 PM 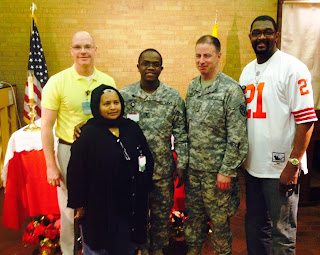 The Department Of Ministry and Pastoral Care at the Evans Army Community Hospital at Ft. Carson, CO. We're missing our Warrior Transition Battalion Chaplain and Assistant, our priest, our Clinical Pastoral Education supervisor and our 6 students, our organist, and 2 other volunteers, but you get the idea . . .
Posted by Steve Satterfield at 7:35 PM